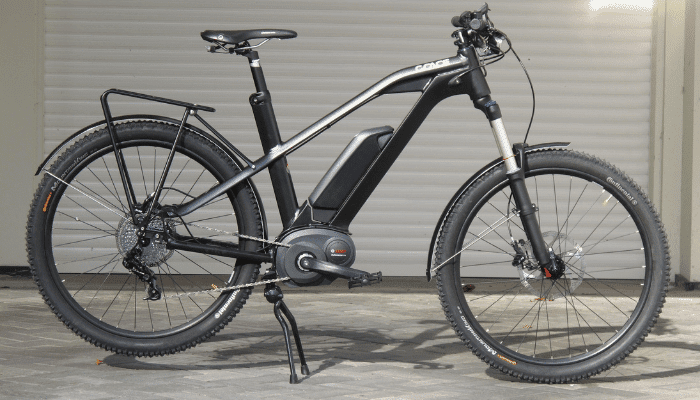 Do you need a license to drive an electric bike?

The short answer is no; most states in the U.S. don’t require e-bikers to have a valid license. However, the licensing requirement depends on which state you live in.

So if you are planning on using your electric bike in a new area, it is important to make sure of the licensing requirements first.

Do You Need a License to Drive an Electric Bike?

An electric bike is a bicycle that can be run on electricity to assist you while pedaling. It has a rechargeable battery that supplies the power and is mounted on the vehicle.

To be classified as an e-bike, the electric motor should be there to assist the rider.

In most places, an operator’s license isn’t required as long as the speed doesn’t exceed 20 mph and the motor rating isn’t more than 250 W.

Licensing Requirements in the U.S.

The federal government doesn’t dictate any state in the U.S. their rules about e-bikes.

Each state has its own rules regarding maximum motor rating and speed limits. So, riders should comply with the codes and regulations of where they plan to use their bikes.

As mentioned, the U.S. recognizes three classes for e-bikes:

Any bike outside these classifications isn’t considered a low-speed e-bike.

Today, only 26 U.S. states observe the three-tiered class system to identify e-bikes based on their speed capabilities. These states have similar regulations regarding safety and operation.

On the other hand, West Virginia and New Jersey both observe a two-tiered class system for e-bikes.

In New Jersey, the definition of a motor-powered bicycle is one operating with a maximum speed limit of 28 mph.

This definition matches the class three e-bike mentioned above, but not the maximum speed limit of the class two e-bike with only 20 mph.

What Does the Law Say About Electric Bikes?

The NPD Group reported a 145% increase in the growth of e-bike sales from 2019-to 2020. This is equivalent to approximately $244 billion in sales, and until today, it still continues to grow.

You might wonder what the law says about e-bikes. Or are they even legal?

Even without a license, e-bikes are legal in most places. In the U.S., most states treat them as regular bikes. Thus, they are subjected to the same regulations.

However, some states and countries treat them as motor-assisted vehicles, subjecting them to the same regulations as regular vehicles.

In the U.S., e-bikes have been recognized since 2002 by the federal government.

Then, the definition of e-bikes by the Consumer Product Safety Commission was amended by implementing the law HR 727.

The law states that an e-bike is a two or three-wheeled vehicle with functional pedals and an electric motor of less than one horsepower.

Additionally, it has a maximum speed of less than 20 mph on a paved surface.

Generally, the licensing requirements for e-bikes vary significantly from state to state and country to country.

E-bike Laws Around the World

If you’re curious about e-bike laws worldwide, e-bikes and traditional bicycles have equal treatment in most countries.

This means e-bikes don’t need a separate operator’s license. However, regulations for e-bikes are different from other countries. So, always check licensing requirements wherever you are.

In Australia, the law surrounding e-bikes only allows a maximum rating of 200 W and a speed limit of 15.5 mph.

Any e-bike exceeding these regulations is automatically treated as a motor vehicle, where standard road regulations should apply.

Generally, no registration or licensing is required for e-bikes. However, some states established their own rules for e-bikes.

For instance, the state of Victoria requires an operator’s license for an e-bike with over 200 W limit. The same rule also applies in Queensland.

Unlike the U.S., Canada doesn’t observe any class system for e-bikes.

Instead, all e-bikes should not exceed the speed limit of 20mph and 500 W rating. All e-bikes can have pedal assist and throttle function.

The federal government doesn’t require licensing for e-bikes unless needed for a local municipality.

Rules and regulations are identical to that of a traditional bicycle, where there are no plates, insurance, and licensing to own and operate.

In 2019, China imposed new regulations for e-bikes. According to the Ministry of Industry and Information Technology, the definition of an e-bike is amended to meet the following criteria:

While it doesn’t need licensing, you need to legally register your e-bike to drive in China. Registration should take place within 15 days from purchase.

Additionally, rules regarding e-bikes vary from city to city. For example, Shenzhen requires registration and helmets in driving an e-bike, while e-bikes aren’t allowed in Guangzhou at all.

In Norway, the case is a bit different. E-bikes are treated similarly to regular bikes according to the Vehicle Regulation.

However, they impose restrictions on the construction of e-bikes, similar to Finland.

The motor should not exceed the 250 W rating with a maximum speed limit of 12 mph. It’s also mandatory to have a function reducing the motor speed when it reaches 15 mph.

If the motor function isn’t working, the e-bike should run only by observing ordinary speed limits. E-bikes in Norway don’t need licensing and registration to drive legally.

Unfortunately, e-bikes are prohibited in public areas in Hong Kong. Any e-bike should be approved as a motorcycle by the Transport Department.

Today, all e-bikes in Hong Kong failed to meet the requirements issued by the department. Thus, they never have granted any licensing and registration for an e-bike.

This means that e-bikes are illegal in Hong Kong. So, try to avoid using them at all costs when you visit the country.

In India, you need to get an ARAI approval to drive any electric-powered vehicle.

If your vehicle has less than a 250 W rating and 21 mph speed, you don’t need a certification. However, you still have to get an exemption report from the said body.

Thus, your e-bike doesn’t need the full testing process, and riders don’t need any insurance, helmet, or license to drive.

In Asia, Japan is definitely no stranger to e-bikes. In fact, out of every ten road bikes, six are electric-powered, according to the Japanese Bicycle Promotion Unit.

E-bikes in Japan should not exceed 250 W rating and 15 mph. Additionally, you can’t ride an e-bike unless it’s registered. The registration requirement also applies to regular bikes.

If you buy an e-bike in Japan, you can only get a pedal-assist bike. If you want one with a throttle, you need a driver’s license and plates.

In New Zealand, as long as your e-bike doesn’t reach 300 W, it’s not treated as a motor vehicle.

Thus, you don’t need a license and registration, similar to bicycles.

In Israel, only those above 16 are permitted to ride an e-bike with up to 250 W rating and a speed limit of 15 mph.

Additionally, all e-bikes should satisfy the requirements of the European Standard and must have approval from the Standards Institution of Israel.

If you’re looking for the best approach to e-bike regulations, let’s talk about the Philippines because there are actually no laws related to e-bikes.

In the Philippines, you can drive an e-bike wherever and whenever you want.

According to the Land Transportation Office, no registration and licensing are required for e-bikes and other bike-like vehicles.

Why Do Rules and Regulations Differ?

You probably wonder why we can’t have one rule for all e-bikes.

Well, the reason is pretty simple. Every state and country has its own traffic rules. Besides, traffic conditions vary from place to place.

Thus, e-bike regulations can have significant differences worldwide. However, rules remain the same for most parts.

Aside from a few countries, such as Hong Kong, you can legally use an e-bike almost anywhere worldwide.

While there are some limitations here and there, you can still use and enjoy an e-bike without so much hassle.

As the demand for e-bikes continues to rise, rules and regulations are also dynamically changing.

Thus, if you own an e-bike, it’s good to check the latest rules and regulations in your area, as they might have been updated and different from those mentioned above.

E-bikes are undoubtedly on the rise. They serve as an excellent and environmentally-friendly option to drive a motorbike, scooter, or car.

Not only do you improve your physical well-being, but you also help the environment reduce carbon footprints.

Now you’ve learned the varying licensing requirements regarding the use of e-bikes.

If you’re planning to get an e-bike, ensure to study the laws concerning e-bikes in your area to increase safety and reduce possible citations.