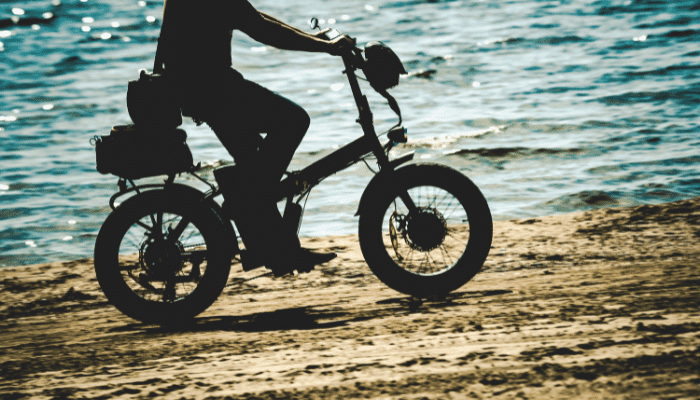 Electric bikes are great tools for commuting, especially those capable of reaching high speeds. But not all e-bikes have identical top speeds.

Generally, the speed of an electric bike depends on its motor Watt rating. So, for example, e-bikes with a high Watt rating reach the highest speeds.

This article will explore how fast electric bikes go, including their average speeds.

What Is the Average Speed of an Electric Bike?

Still, the speed range of an e-bike varies depending on its Watt rating. So, let’s examine the average speed of electric bikes based on their wattage.

The Average Speed of a 750W Bike

This means that e-bikes with 750W motors feature an average top speed.

A 1000W e-bike can reach a top speed of about 35mph (56kph). Many adult-sized commuter e-bikes fall into this category.

A 2000W electric bike can reach a top speed of about 43mph (69kph). Still, this top speed is only possible on flat surfaces.

Riders who use a 2000W e-bike on inclines will likely experience lower top speeds.

What’s the Lowest Speed of an Electric Bike?

The slowest e-bikes are often designed for children. These bikes might have a top speed of about 9mph (approximately 15kph).

The lowest speed setting is typically between 3mph (5kph) and 5mph (8kph). The STAYC 12eDRIVE is an excellent example of a low-speed e-bike.

For example, the Rad Power Bikes RadMission e-bike has a top speed of 20mph (32kph). Without the pedal assist function, it travels as fast as the rider can pedal.

Consequently, the lowest speed of an e-bike varies between about 3mph (5kph) to 20mph  (32kph).

What’s the Highest Speed of an Electric Bike?

Somewhat surprisingly, this bicycle has a 3000W motor, which is less powerful than other e-bikes. But when users operate it at full speed, its battery life suffers.

It’s crucial to remember that e-bikes with higher speeds may have shorter battery lives. After all, bicycles only have so much room for a battery.

What Determines an Electric Bike’s Speed?

Several factors influence an e-bike’s top speed. Some of the most significant factors include:

Let’s explore these factors to discover how they impact an e-bike’s speed.

But an e-bike’s battery has a limited power capacity. Equally, its motor can only generate so much force.

However, weight isn’t as crucial as an electric bike’s motor wattage.

An electric bike’s Watt rating refers to the amount of power the motor can consume. Motors with higher Watt ratings tend to be powerful.

As you might expect, powerful motors are more capable of reaching incredible top speeds.

The elevation of your chosen route also impacts speed.

When bikes climb hills, their top speed decreases. But the opposite is true when traveling down an incline.

An e-bike’s motor has to work harder to scale inclines. So it’s unable to produce the same speeds available on flat surfaces.

A fast e-bike might seem like a natural choice for commuters. But it’s important to note that speed impacts battery life.

The faster you choose to operate an electric bicycle, the more you drain battery power. So, if you consistently ride at an e-bike’s top speed, battery life may be short.

Are you looking to balance speed and battery life? If so, you’ll want to choose an e-bike with a high battery capacity.

The battery capacity of an e-bike typically varies between 24V and 48V. Those looking to travel several miles at top speed should choose a 48V e-bike.

These high-capacity electric bicycles can also handle elevations more easily. After all, they’ll have more battery power to push you up hills.

Are Electric Bikes Faster Than Scooters?

Electric bikes and standing commuter scooters are equally fast. Both have a maximum top speed of 50mph (80kph).

Gasoline-powered scooters often have much higher average speeds. However, you may need a special license to operate these vehicles.

Can You Ride an Electric Bike on the Road?

You may be required by law to operate an e-bike on roadways. After all, some electric bicycles can reach incredible top speeds.

Operating these bikes on sidewalks could pose a danger to pedestrians. However, riding an e-bike on a roadway can be dangerous.

Be sure to consult with your local Department of Transportation (DoT) before operating an e-bike. They should be able to offer guidance about whether to ride on roads or sidewalks.

Do You Need To Wear a Helmet When Riding an Electric Bike?

If you’re riding an electric bicycle in the U.S., you’ll need a helmet. After all, e-bikes can reach impressive speeds.

If you’re traveling at 20mph and suddenly fall, you could suffer severe injuries. Wearing a helmet protects your skull, potentially preventing fatal accidents.

Besides, many states require bicyclists to wear helmets, no matter their age. Refusing to wear a helmet while operating an e-bike can result in hefty fines.

The average speed of an electric bike is 20mph (32kph). However, a bike’s speed range depends on its Watt rating.

The slowest e-bikes are those with a 750W rating. These can reach speeds of 28mph (45kph).

When operating a high-speed electric bike, be sure to exercise caution. You’ll also want to wear a helmet, especially if riding in the U.S.