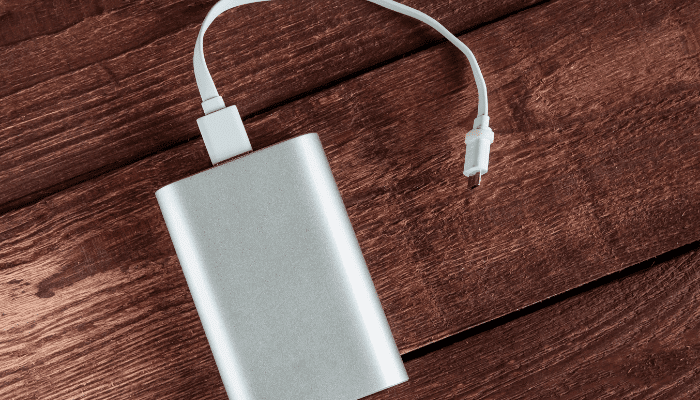 With things warming up for the summer, many people are getting their bicycles out of storage and getting ready to hit the trails or commute to work on two wheels instead of four with an electric bicycle.

Whether you cycle for transportation or pleasure, an electric bicycle can help you get where you are going.

However, one big question surrounding them is whether or not you can charge them on the go.

The short answer is ‘yes’! There are many benefits to charging your battery while out and about.

There are many ways you can refresh the battery of your electric bike while on the go. From simply plugging into a power outlet to carrying a designated power bank for when you start to run low, there is no reason you should run out of power.

Why an Electric Bicycle?

An electric bicycle lowers the barrier of entry for cycling. Whether the rider is disabled, older, has a long commute with hills, or wants a little bit of extra push to get going, an e-bike can be indispensable.

Though they tend to be more expensive than a regular bicycle and significantly heavier due to the battery, e-bikes are faster than analog bicycles and ultimately cheaper than cars.

Because an electric bicycle runs entirely on electricity, there is no need for gas to power it.

The battery, however, means that there is the possibility of losing enough charge that the bike will not help you pedal.

No one wants to be stuck pedaling twice as hard or even walking to get an e-bike home after their battery runs dead. So what are the options?

The battery is the most expensive part of an e-bike, so it is important to know what you are getting into before purchasing a battery.

Your battery will dictate everything, from whether or not it is compatible with your bike to whether you must charge it at home or on the go.

The first important thing to be aware of is whether you have a lithium-ion battery or a lead-acid one. With most electric bicycles, it will be the former, but you should be able to tell by reading the label.

A lead-acid battery has different needs than a lithium-ion battery.

Additionally, e-bike batteries come in various capacities, though most will be between 250 and 500 watts.

How many watts dictates how far the electric bike will carry you, but that will be between 20 and 40 miles–though it can be as much as 60 if you have the correct battery.

The simplest way to charge your e-bike on the go will be to take a wall charger with you and find a power outlet.

It is a simple matter to stop at a cafe and grab a bite to eat while you hook your battery up and let it charge on the table beside you.

There will probably be plenty of people doing the same with their laptops. It is also an excellent opportunity to recharge your body with a nice beverage and snack.

They make chargers that allow you to change the amount of power going into your battery, which is more expensive than fixed-rate chargers.

It is likely a fixed-rate charger that will have come with your bike battery, to begin with.

Most of the time, if you have not stopped in at a cafe, the outlets available to you are in places like fire stations and libraries.

In this case, use a power bank to charge your battery; however, there are a few things you will want to consider in doing so.

A power bank is a portable charger that you plug into the wall to store energy.

You can then plug your other electronics into it and transfer the power. Some have flashlights built-in, but generally, they are to charge other things.

Most of them plug into a wall to charge, but there are some with solar panels built in.

First, you will want to be sure that the power bank you are using holds more energy than the wattage pull of the battery you are trying to charge with it. Any less and it will not work.

Second, you want to be sure that the power bank you intend to use is light enough to justify taking it with you. The battery of your e-bike is already going to add a lot of weight, though it makes up for itself in convenience.

There are power banks that come equipped with solar chargers. With a little bit of doing it is also possible to hook a solar panel directly up to your electric bike battery.

Although it isn’t common for a solar panel to output enough to charge an electric bike battery, they do exist and this can be an excellent choice for those who want to remain eco-friendly.

Taking Care of Your Battery

Experts recommend that cell phone batteries be allowed to die entirely once in a while for the overall health of the battery.

It should be no surprise that an electric bike battery has its own needs.

Most electronic bicycle batteries are of the lithium-ion variety. Although some bikes take lead-acid batteries, like the kind you find in cars, they aren’t as common.

Lithium-ion batteries have greater longevity when charged to only 80%. If you care more about the longevity of your ride than the health of the battery overall, that is fine.

It should still last you a couple of years even if you top it off every time you plug it in.

It is worth noting that it is fine to charge your battery to 100% as long as you don’t leave it on a full charge. If you use it as soon as it is finished charging, you can get the best of a full battery and better longevity.

Leaving your battery in storage while charged to 100%, however, is not only bad for the overall longevity of the battery. It is bad for your battery life.

Another thing to keep in mind is temperature. You want to keep your battery cool, but not cold.

It’s best not to leave your battery in scorching hot conditions for hours at a time, or try to charge it when it’s too cold.

While you’re on the go, it is unlikely that your battery will be too cold to charge it. Riding your bike will heat the battery on the inside, even if you can not feel a difference from the outside.

It is not only okay but encouraged to charge your bike while out on the run.

Immediate use is healthy for your electric bike’s battery life, and it makes you less likely to run out of charge while out and about.

So what are you waiting for? Pack up your charger and take a spin.