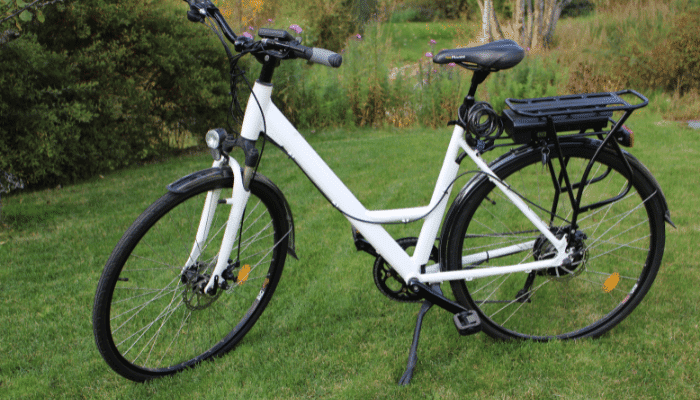 With rising gas prices, skyrocketing costs for new and used cars, and our shared climate crisis, electric bikes feel like a wise alternative.

But are electric bikes bad for the environment? Are the solution to our gasoline, congestion, and environmental crisis not a solution at all?

Learn more about electric bikes and how they influence a rider’s daily life and our shared climate.

So Are Electric Bikes Bad for the Environment?

No way! Electric bikes are a great alternative to traditional vehicles for short and long distances.

Electric bikes release zero emissions into the air. These vehicles do not contribute to traffic congestion or other challenges with modern commuting.

Electric bikes are hailed as a positive step more people should adopt to combat climate change.

The only environmental impact of an electric bike is in the manufacturing process. Another impact would be if the bicycle is not recycled and ends up in a landfill.

What Exactly is an Electric Bike?

As the price of used cars rises, the gap between the cost of a new electric bike and a used car favors electric bikes even more.

Electric bikes may simply give the rider a boost during a steep hill climb. Other styles of electric bikes turn the bicycle into a moped-like vehicle with no human pedaling power required.

Both types are considered electric bikes and are both more beneficial to the environment than cars.

There are many advantages to choosing an electric bike. From cost-saving to space-saving versatility and the many personal and community benefits, electric bikes offer several pros.

There is little ongoing investment for an electric bike, except for the electricity needed to charge the bicycle.

As the price for used cars rises, the gap between the cost for a new electric bike and used car favors electric bikes even more.

Connect more easily to green spaces when riding a bike and enjoy a break in a local park or trail.

If you live in a large city, an electric bike will help you travel just as quickly but much more easily.

Never worry about parking and keep your investment safe as you carry your bike into your apartment after your ride. City living practically begs for an exciting electric bike.

Before, a bicycle may not have felt versatile for most people. Traditional bicycles require a certain level of fitness to be responsibly used.

However, the powerful assistance of electric bikes makes this type of travel more accessible to more individuals than ever before.

As discussed above, electric bikes are far less damaging to Mother Earth than any gas-powered vehicle.

Electric bikes do not contribute to the 4.6 metric tons of carbon dioxide contributed by a typical passenger vehicle annually, according to the Environmental Protection Agency.

Not only do cars emit carbon dioxide, but other harmful greenhouse gasses as well. Cars, trucks, and SUVs all pump methane, nitrous oxide, and hydrofluorocarbons into the air we breathe.

Bicycling is well known for its many health benefits. Electric bikes are not on the same level as bicycles without any pedal assistance, but they still provide health benefits.

Studies now show electric bikes are more beneficial than simply walking. Bicycling supports cardiovascular health as well as builds the muscles in your legs and feet.

Connecting to nature while biking boosts your mental, emotional, and spiritual health as well as exposes you to essential Vitamin D through sunshine.

There are many advantages to electric bikes. However, there are still some disadvantages to consider before taking the plunge into this alternative form of transportation.

Take time to deeply consider your lifestyle and if an electric bike would be a good fit. For many, the stability of a traditional vehicle is needed for the way they live their life.

Examine your lifestyle limitations by thinking through an average day in your life.

Do you often store or carry a lot of items to and from work? Is the weather unpredictable where you live? Can you reasonably bike in the clothing you need to wear for your daily routine?

If you must wear an impeccable suit to work and there is a probability you will be caught in a snowstorm, an electric bike may not work in your lifestyle.

Perhaps an electric bike is a supplemental form of transportation for you instead of a replacement mode of travel.

While a traditional vehicle can travel thousands of miles before an oil change or tire rotation is needed, bicycles require more frequent maintenance.

Often, the fixes needed are spontaneous and demand a do-it-yourself solution. Are you willing to learn how to fix an electric bike?

You will be a much happier bicycle owner if you learn the basics of bicycle maintenance. If mechanics are not your thing, relying on an electric bicycle may not be the best option for you.

According to Consumer Reports, the average price for an electric commuter bike is about $2,000.

High-end electric bikes can reach up to $7,000 with entry-level electric bicycles costing less than $500.

Of course, charging is an issue you don’t have with a traditional bicycle. The average charging time for an e-bike ranges from three and a half hours to six hours.

Typical electric bikes are outfitted with easy-to-remove batteries in a convenient location on the bike. These batteries are simple to charge, just like your laptop or cell phone.

If you must use your electric bike before the charging is complete, you can. The bicycle will still operate as a traditional bike without any pedal assistance.

However, the ride will be noticeably rougher, and riding without a battery is not recommended.

Most of us achieve a driver’s license as a childhood rite of passage. It is rare to encounter someone who does not know how to drive.

But, those who do not know how to ride a bicycle become more and more common as people age.

While the old saying goes, “it’s just like riding a bike”, the truth is there is a vulnerability in choosing an electric bike.

Make sure you know how to balance on a bike and are very familiar with the electric mechanisms before taking your electric bike out on the road.

Not only do electric bike owners need to be confident riding their bicycles, but they must also know the shifting rules of bicycling.

Different cities or states have their own ordinances regarding bicycles. Unlike car travel, bicyclists should do their research before traveling to new places.

The electric bike movement is becoming more accessible than ever. If you are interested in electric bikes, there are several thrilling trends to try.

Federal tax credits, as well as programs in states like California, would pay electric bike owners back some of the bicycle’s purchase price.

Companies like Lime and Lyft partnered with locations like San Francisco to provide a fleet of electric bikes.

These bikes are public property with public charging spots. Riders download an app to unlock and ride the bicycle for as long as they like.

The app tracks how long the rental is active with the rider, running a meter like a taxi.

Electric bike programs like these offer programs for both short-term and long-term use.

Tourists benefit from short-term rentals to reach different sightseeing locations effortlessly and cheaply while experiencing the city in a new way.

Locals also benefit from this electric bike trend. In some cities, people can purchase a subscription to an electric bike and use a specific bike day after day.

These programs are a great way to introduce yourself to electric bikes and see if they work in your lifestyle.

Should I Consider an Electric Bike?

Electric bikes make eco-conscious travel more accessible than ever. Unlike traditional bicycles, many varieties of electric bikes provide enough assistance for those who are not as athletic.

Those willing to repair their e-bike will appreciate this mode of transportation even more.

There are many advantages to choosing an electric bike. For many, the versatility, cost-saving, and effortlessness of travel make an electric bike a great partner to their lifestyle.

Electric bikes offer numerous personal health benefits and environmental advantages for us all.