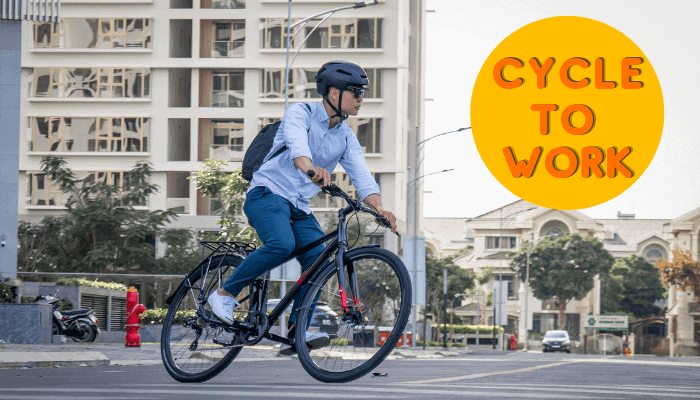 Maybe you have heard about cycle-to-work schemes where employers give tax breaks to employees who choose to ride bicycles to and from work. But, the question many of these workers have is, are e-bikes included?

Some cycle-to-work schemes do include electric bikes. However, others do not. We will go into detail regarding how that works and why certain schemes don’t allow them.

Electric bikes make commuting more straightforward, so let’s take a look at what these schemes are, whether e-bikes are a part of them, and some of the overall benefits of these programs for employees, companies, and the planet.

What’s a Cycle to Work Scheme?

British Cycling, an organization that focuses on news and events related to the Great Britain Cycling Team, did a report on cycle-to-work schemes that breaks down what they are in layman’s terms. They started back in 1999 when the UK released its Finance Act.

The Act said employers were now allowed to give their employees tax-free bicycles. The price of the bikes would be taken out of their paychecks until paid for in full. The full price would be greatly reduced, up to 40% less than the original purchase price.

The amount of money taken out of each salary will be subject to the individual’s situation. Each person that comes under the scheme will agree to a certain amount. The amount in question must not exceed their typical expenses.

If an employee wants to participate in a cycle-to-work program, they would first ask their employer if the company is participating in it. If they are, then the employee gets to choose the bike they want tax-free, including safety accessories.

The cost and style of the bike the employee can get will depend on the employer. For example, according to Citizens Information, employees who want to take advantage of the program can choose up to €1,500 in bikes and equipment, and they can re-apply for the program every 48 months.

There’s almost no accessory that an employee cannot get under this program. The safety equipment they can retrieve includes everything from helmets to reflective clothing to bike locks to bells and horns.

They can also get maintenance equipment, such as tire pumps and entire cycle tool repair kits.

Are E-Bikes Included on Cycle to Work Schemes?

Yes, e-bikes are included in some of these cycle-to-work programs

For example, Electrek a news site, reported in February of 2022 that certain countries who are excited about these programs are increasing incentives for folks who want to ride a bike back and forth to their place of employment.

One of these places is Belgium, a country where bicycles usually line the streets on racks and are on the roads as much as cars. One recent incentive is that for every kilometer a worker rides their bike or e-bike to or from work, they get €0.25, which comes out to about forty-five cents in USD.

The UK and The Netherlands have similar incentives to Belgium, and the popularity of cycle-to-work programs is growing as the years go on.

These benefits make the programs attractive, and so do the physical frames of participants. Many of them are seeing the results with apparent weight loss and increased muscle tone developed from biking instead of driving.

How Do Employers Implement Cycle to Work Schemes?

It’s always the choice of the employee whether or not they want to participate in a cycle-to-work program, and it is never mandatory at all.

It is, however, the responsibility of the employer to make the bikes and safety/maintenance equipment available to the workers who want to participate in this very cool initiative.

However, not all safety equipment is included, such as non-reflective waterproof gear or training on how to ride a bicycle.

One thing the companies have to pay attention to is what the UK Gov’s Employment Income Manual calls “qualifying journeys.”

These are the specific commutes between home and work, which can be somewhat hard to identify, being that employees will very likely use the bicycle their job gave them for leisure time activities as well.

That doesn’t mean an employee who uses the bike for other things will be disqualified from the benefits of the cycle-to-work program. As long as the primary use of the bike is to get them back and forth from their job, then further use of the bike is seemingly overlooked and not taken too seriously.

That said, workers in the program are not required to, say, keep up with exactly how many miles they ride on their bike (or e-bike).

Rules to Participate in a Cycle to Work Scheme

There are specific rules that participants must follow in cycle-to-work programs.

For example, according to Cyclescheme Limited (an entrepreneurial organization that promotes these programs), participants have to be at least 16 years old, be paid by the PAYE (Pay As You Earn) system, and still make at least the minimum wage AFTER the payment for the bike gets taken from their paycheck.

Also, at least 50% of the total use of the bicycle must be for commuting back and forth to work.

Workers are allowed to get insurance on the bike while in the program, and they have what is called an ownership option when signing up for the program, which many of the employees opt for.

Riding a bicycle to work requires physical energy. This requirement can be either a good or a bad thing, depending on your job type.

For example, if you work in an office environment, and are going to be sitting down for most of the day at a desk, then a bicycle ride to and from work could be an energy booster for a body that doesn’t get a whole lot of exercise throughout the day.

But, if you work in construction, a much more physically demanding profession, then you may not want to ride a bike to work because it could take away the energy that you’d need throughout the workday.

Unless, of course, your job’s cycle-to-work program allows you to get an e-bike!

E-bikes have motors that make it a lot easier for a rider to pedal and travel much longer distances without burning up a lot of physical energy. The employee will still get exercise a couple of times a day with an e-bike but won’t have to show up to work washed down in sweat.

According to Personnel Today, there are several benefits for both employees and companies who participate in the cycle-to-work schemes. Probably the most obvious one – a staff that has more physically fit workers – is still a highly motivating factor among participants.

This is said to be because of the increased good mood of workers, being that exercise has the benefit of making people feel a heightened sense of confidence while also making them more stress-tolerant.

Although workplaces will have to set up many more bike racks on their premises as these programs become more and more popular, it’s a small price to pay for the reduced congestion of vehicles in and around their property!

And the fact that there are fewer cars, trucks, and SUVs being used daily undoubtedly helps the environment by reducing each bike rider’s carbon footprint.

When bike riders commute to work, they feel good inside about doing their best to personally help the planet. This gives them a sense of pride and well-being, and programs like these also are attractive to recruits who are thinking about becoming permanent employees with a participating company.