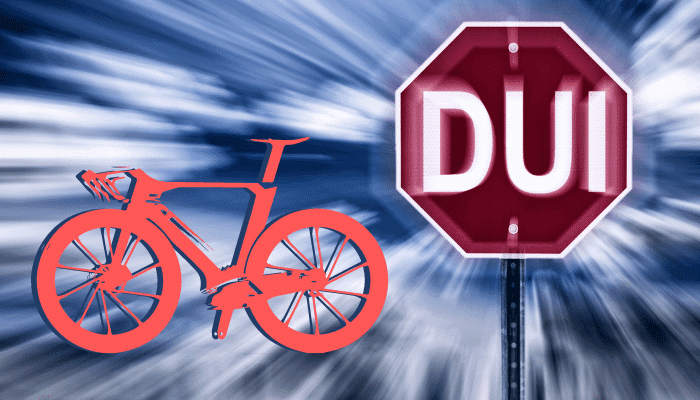 Yes, you can get a DUI while riding an electric bike in most areas.

Laws vary by area, so there may be an occasional exception to this, but most areas consider an electric bike sufficiently vehicle-like to qualify for DUIs.

However, while you can get a DUI on an electric bike, it’s rare for this to actually happen.

What’s The Difference Between An E-Bike And A Vehicle For Getting A DUI?

The primary difference between an e-bike and a vehicle is legislative. That is, whether there’s any difference at all depends on how a jurisdiction defines vehicles.

It may seem clear-cut that a rideable machine with an engine is a vehicle, but by a strict reading of the law, that’s not always the case.

For example, different areas may consider something a vehicle only if it weighs more than a certain amount or can reach a certain speed.

E-bikes are usually light and slow, so they won’t necessarily fall under such definitions.

Similarly, vehicles are usually self-propelled, which means they don’t require any special human effort to move.

Can You Still Ride An Electric Bike After Getting A DUI?

Unlike many other motorized methods of transportation, e-bikes do not require a driver’s license. This means you can ride them even with a suspended license.

Since a DUI won’t stop you from riding an e-bike in the future, many police departments don’t even bother with it unless you’re being particularly problematic.

Are Electric Bikes And Electric Motorcycles The Same For DUIs?

No. Electric bikes are the slower and weaker of these two options, only slightly more complicated than a traditional bike.

How Set Are Laws About DUIs For Electric Bikes?

Most laws regarding DUIs for electric bikes are largely untested.

In the American legal system, most laws are on the books once enacted by the appropriate legislative body and signed by the right person.

This is often the state legislature and governor, but laws can also be implemented by city councils, mayors, and other organizations as appropriate.

However, the fact that a law is in force doesn’t mean it’s permanent. If someone is charged under such a law, they may argue to a judge that the law itself is unconstitutional, or perhaps contradictory to other laws.

If this happens, a case will often go through an appeals process. This helps determine if the law should keep existing or not. If the law reaches a state Supreme Court, that decision is usually final unless the legislature enacts a new law.

Laws about DUIs on electric bikes are fairly rare to start with and don’t get tested in the courts much. As such, they could change significantly if a case goes to court.

There are two main reasons why electric bikes aren’t considered vehicles in many areas.

First, most electric bikes are only assistive, rather than self-propelled. This means that they help the rider, but the rider still needs to move the pedals to make the bike go.

This is a different functionality from vehicles that can propel themselves, like electric motorcycles.

Since e-bikes don’t do that, they’re usually not treated as vehicles, though some states, like Illinois, classify bicycles with battery-powered engines capable of traveling 20 miles or more an hour as vehicles that are subject to DUI laws.

The second reason is that most manufacturers deliberately hobble electric bikes to stop them from performing too well.

Companies that make electric bikes aren’t trying to make the most powerful vehicles on the market. There are other vehicle categories for that.

Instead, they’re trying to keep electric bikes weak enough to avoid falling under most legal definitions of a vehicle. This is a deliberate design choice, not an accident or coincidence.

The result is that electric bikes are rarely considered vehicles for legal purposes, and therefore don’t fall under DUI regulations.

Are Cops Lenient About DUIs For Electric Bikes?

Yes, cops in many areas are lenient about trying to give DUIs to people riding on electric bikes. There are several reasons for this.

First, electric bikes aren’t particularly dangerous. Most weigh less than 30 pounds and don’t have much kinetic force even when moving at maximum speed.

The Consumer Product Safety Commission notes that there were less than 75 fatalities for micro-mobility devices (including not just e-bikes but also scooters and other things) over recent years.

For context, over a thousand bikers die each year. Part of the difference is that regular bikes are far more common, but even adjusting for that, problems with electric bikes are rare.

Cops usually focus their efforts on the most problematic events in their areas. For DUIs, these are overwhelmingly larger vehicles.

This isn’t to say that riding an electric bike while drunk is safe, but rather than watching for rare problems on bikes, most police prefer to focus on other matters.

Electric bikes are a convenient alternative to larger vehicles, especially in areas where public transit won’t help move people around.

E-bikes still require a minimal level of manual coordination. If someone is too drunk, they won’t be able to ride the bike at all.

It’s also possible to drive a car drunk, but since they’re self-propelled, there’s a higher threshold for operation.

Electric bikes can discourage people from riding if there’s too much danger, so in most cases, they’re not a concern.

Finally, most people only use electric bikes for short trips. Most electric bikes can only go 25 to 50 miles in ideal conditions, and anyone planning to get drunk probably isn’t going too far away. High-end bikes may go up to 100 miles.

People are willing to ride cars much further away, so if police see someone drunk on a bike, they know that person’s house is probably close. It’s easier to let them go, or possibly give them a ride.

Can Cops Hand Out DUIs Anyway?

Whether a cop can hand out a DUI for someone on an electric bike depends on local laws. However, there are a few factors to consider here.

First, if a biker is noticeably drunk, police are far more likely to try handing out a DUI even if the law is questionable. The drunker you are, the more trouble you could get in.

Second, many areas give police a lot of discretion. They assume that officers are acting for public safety, so courts may interpret statutes broadly.

However, chances are your blood alcohol content will need to be at least 0.08 to get a DUI. If it’s not that high, you’re probably in the clear.

What Citations Might Someone Get Instead Of A DUI?

While DUIs for riding on an electric bike are rare, that doesn’t mean police have no other options for discouraging bad behavior.

Depending on the circumstances of an incident, police may hand out citations for disorderly conduct or parking violations. They might also apply a charge for using a personal electronic device like a smartphone.

Other common problems could be the failure to have a light or not wearing reflective clothing so others can see you.

Even if these don’t apply to you, a police officer could argue that you’re riding too fast for the conditions, especially if you’re out drinking late.

In short, a sufficiently creative officer can usually find some way to slap on a fine for anyone causing trouble, even if it’s not technically a DUI.

What Are The Best Ways To Avoid A DUI While Using An Electric Bike?

First, try to drink as little as possible. The goal is to keep your blood alcohol content under 0.08 (or whatever the limit in your jurisdiction is).

Second, if you plan to be out for a while, consider drinking during the first half of your trip. Let your body process the alcohol for an hour or two before you go home.

Human bodies lower blood alcohol content by about 0.015 per hour, or roughly one drink an hour. If you plan your drinks and your timing well, you can be sober enough to bike at the end of a night.

Third, make sure you’re ready to follow the other rules of the road. For electric bikes, this usually means wearing reflective clothing, having a light if it’s dark out, and staying on sidewalks.

Fourth, make sure you bring a helmet and other protective gear. Even if you take a drunk fall from an e-bike, adequate gear should protect you from serious harm.

Finally, know your local rules and regulations. All of the content in this article applies to most areas, but specific states and jurisdictions may have different views.

If you’re unsure about the laws in your area, talk to an attorney. Alternatively, call your local police department and ask what they think of e-bikes. Chances are you’ll get a good answer.