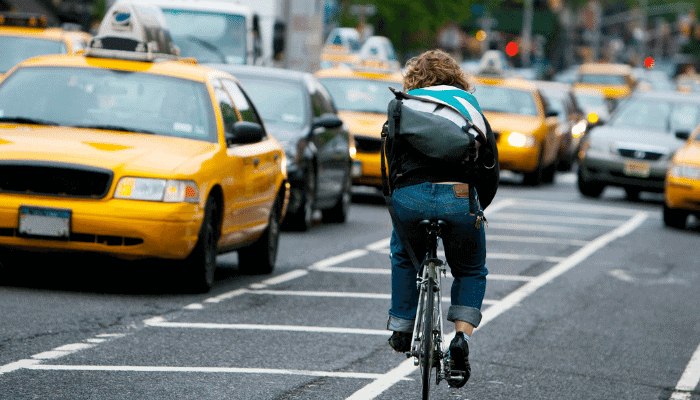 The short answer is yes, Electric bikes are legal in the state of New York.

However, you previously could be fined up to $500 for being caught driving an electric bike. This fine was applicable anywhere in the state of New York.

The fines for riding electric bikes became a thing of the past in April of 2020 when the state Assembly approved former Governor Cuomo’s electric bike bill, proposed in his executive budget earlier that year.

Cuomo had previously vetoed a similar e-bike bill because it did not include a helmet requirement and the definition for Class 3 bikes was unclear.

In the new bill regarding electric bikes, Cuomo clearly defined Class 1-3 bikes, distinguished these from bikes with electric assist, and established a few discrepancies regarding the rule.

For example, the bill gives local governments the right to establish their own rules. This gives counties and cities the right to ban e-bikes altogether.

On top of requiring e-bike riders under 18 to wear helmets, the bill requires that all riders on class 3 bikes wear helmets and prohibits the use of any e-bikes on sidewalks.

You can operate e-bikes on some New York highways, but they must have a speed limit of 30mph or less. Local municipalities always have the power to regulate their rules around these electric-assist bikes.

What Qualifies as an Electric Bike?

Now, the obvious question becomes: what qualifies as an electric bicycle? Furthermore, what are the different classes of electric bikes?

This bill classifies e-bikes as being “no more than thirty-six inches wide and having an electric motor of less than seven hundred fifty watts, equipped with operable pedals, and meeting the equipment and manufacturing requirements for bicycles adopted by the Consumer Product Safety Commission.”

Furthermore, there are three different types of bicycles with an electric assist, and the bill identifies these various classifications.

The bill identifies Class 1 bikes as “A bicycle with electric assist having an electric motor that provides assistance only when the person operating such bicycle is pedaling, and that ceases to assist when such bicycle reaches a speed of twenty miles per hour.”

Class 2 bikes are defined as “A bicycle with electric assist having an electric motor that may be used exclusively to propel such bicycle, and that is not capable of assisting when such bicycle reaches a speed of twenty miles per hour.”

Class 3 bikes are identified as “Solely within a city having a population of one million or more, a bicycle with electric assist having an electric motor that may be used exclusively to propel such bicycle, and that is not capable of assisting when such bicycle reaches a speed of twenty-five miles per hour.”

It’s important to note that while electric bikes might look similar to mopeds, they are different in classification.

While you do not need to register your electric-assist bikes or scooters, all mopeds must be registered to drive in the state of New York.

Another important distinction to make is that Class 3 bikes are only allowed in New York City, but they are prohibited in other areas of the state.

Riders must pay careful attention to the rules and stipulations in areas regulated by New York state parks. In many cases, e-bikes are strictly prohibited around state parks.

These cannot be registered in the state of New York, and thus cannot be used on sidewalks, streets, or highways.

Pros and Cons of the Ebike Bill

For residents of New York, there seem to be mixed emotions about the bill.

The director of state and local policy for PeopleforBikes, Morgan Lommele, has worked tirelessly along with others to make e-bikes legal in the state.

Lommele states that while Class 1 and 2 bikes are synonymous with industry standards under the bill, Class 3 bikes are not.

While the bill defines and requires Class 3 bikes to cease to assist at 25mph, some Class 3 bikes take up to 28mph to stop assistance, making them illegal under this bill.

Another perceived benefit of the bill is that e-bikes have most of the same rights as other pedal-bike riders, and are excluded from the category of motor vehicles. However, riders must be 16 to operate these vehicles.

One pro of the bill is that e-bike riders may carry one passenger with them. On the other hand, groups of e-bike riders are required to ride in a single file line.

Additionally, while riders are happy that they can now use their e-bikes on highways with posted speed limits of 30mph or less, there are still many of these low-speed highways that prohibit the use of e-bikes.

Furthermore, there are so many rules and regulations around the use of these electric-assist bikes that even an experienced rider would be confused.

Navigating which roads you can take and which are prohibited makes one’s route inefficient and ultimately unsustainable.

Lommele compares these unclear standards to buying cars, noting that many e-bike salesmen are unsure of the regulations regarding each old bike. “Imagine trying to buy a car and not knowing if it was legal on every street?” Lommele states.

At the end of the day, electric bikes are legal in New York state. However, riders must be careful and ensure they are adhering to the laws around riding these bikes.

These laws are subject to change under the jurisdiction of city officials. Laws and regulations will also vary depending on the city and county you are riding in.

Be sure to check the rules before riding an electric bike in your area. Nobody wants to be caught driving on a street when they shouldn’t be.