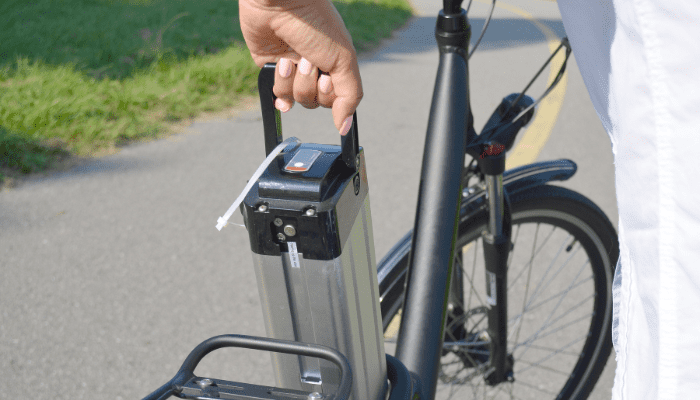 No matter how efficient and green your E-bike is, at some point, you’ll need to replace its battery. Just as your combustion-engine car eventually needs a new battery, your E-bike battery won’t last for the lifetime of the E-bike.

However, you can’t go to the store and buy just any E-bike battery, as E-bike batteries are not universally compatible with each other. Aside from the size differences you might encounter, batteries offer different amounts of power, have different chemical makeups, and even use different charging methods.

Replacing your battery with the wrong one will, at best, do nothing to power your Ebike, and at worst, it could damage your E-bike to the point of being unrideable. Also, the wrong battery might not fit on your bike. So how do you know what to get?

Start With the Manufacturer

The simplest way to ensure you have the correct battery is to buy the exact battery that you’re replacing from the manufacturer. You can consult your bike’s owner’s manual, or the brand’s website, to track down the information you need.

While you may need to order it, there’s a chance the retail operation where you bought your Electric bike carries replacement batteries.

The best way to replace your E-bike battery is to go to the store and tell them you need a replacement battery for your brand A, model X electric bike. You’ll get the same brand of battery as the one you’re swapping out, and all the specs will match up.

But what if that’s not an option? What if brand A doesn’t make batteries? What if they went out of business?

You’ll need to know technical things like the wattage and amperage your E-bike needs, but there are other considerations you might not think about at first.

One consideration is the physical attributes of the battery. Since electric bikes have a dedicated space on the bike to hold the battery (and hold it securely in place), getting the wrong sized battery is a real possibility.

If yours is a bike with a battery cage that the unit slides into, a battery that’s too large won’t fit. Riding with too big a battery means having to figure out a way to hold it in place while you ride, and you risk having your homemade battery security system failing on you.

Too small of a battery presents a similar problem — if the battery doesn’t sit securely in its spot because it’s rattling around, it can just as easily fall out of the frame.

No matter why your battery falls off your bike, it’s a problem. Your bike won’t run without the battery, and a battery falling onto the road can easily suffer damage that can render it inoperable.

Sometimes a battery’s terminals sit on top, and sometimes they’re on the side. You can make either location work in most cases, but that’s not always the case with ebike batteries.

The bike has a designated spot for the battery, and even if you have the correct size battery, if the terminals are not in the same spot as those of the original, you won’t be able to attach to them.

The terminal’s location and the battery size are two significant issues when deciding whether to replace your battery with the same model as the old one.

But there are other, more technical considerations.

Even if you’re an old hand at riding ebikes, you may not fully understand watts, amps, volts, and other techie talk revolving around electricity.

These terms get thrown around and combined as we specify what batteries can do for us. We need to know the old battery’s capacity, not just its physical dimensions.

Your old battery should have listed its voltage, amps, and watt-hours, which measure how long the battery will work until it needs charging.

While most ebikes use 36V batteries, more and more manufacturers have begun using 48V batteries. This size increase allows for a faster ride and the ability to attach more electrical amenities. Ebike batteries are also available in 12V and 24V, though those smaller voltages will power the bikes for much less time.

But this means that you must know the voltage you need. Even if you found a 48V battery that fits in the same space as your old 36V, the higher voltage will likely damage your bike’s electronics.

We pay attention to watts and amps, too. Your battery has a certain amount of amp-hours (Ah), which measures the number of amperes it can provide for one hour.

However, that’s only part of the picture. Having a 10Ah battery doesn’t mean 10 hours of ebiking. We also have to look at the voltage, as the formula for calculating watt-hours (Wh) is:

We do just a bit more math since we know that, depending on how fast you ride and what other electrical attachments you have, a mile will cost your battery between 10 and 20Wh.

Our hypothetical battery, then, can take us somewhere between 20 and 30 miles depending on usage.

All of these considerations go into finding the correct battery. Physically too big or small? You risk dropping it off your bike. Wrong voltage? You can damage your motor. The wrong battery might not even fit.

Too Much Voltage vs. Not Enough

If you put a battery on your bike with a different voltage than what’s specified, you can damage your bike. The motor on your ebike supports a specific wattage. If the Wh of your new battery exceeds that wattage, the engine will suffer damage.

In our earlier example, an ebike with a 500W capacity would work with the 36V, 10Ah battery. However, if we instead tried to use a 48V battery with a higher Ah number — say, 12 — we would exceed the bike’s capacity.

The extra Wh can easily damage the motor and the rest of the bike’s electronics.

However, if your voltage is too low, the battery may not be able to power the bike at all, as it won’t have enough energy to turn the motor.

While many rechargeable batteries are lithium-ion, that’s not the only type of rechargeable battery out there. And there are different kinds of lithium units, which is another factor you’ll need to consider as you look for a replacement battery.

There are many uses for lithium-ion batteries, but their chemical composition is different.

Lithium nickel manganese cobalt oxide batteries are the most common ones used in ebikes, bringing together an ideal combination of size and power.

Lithium manganese oxide batteries offer larger power stores, and find use in electric cars and the like.

Other lithium-ion battery compositions exist for more specialized uses. The chances are good that the ebike battery you want to replace is a lithium nickel manganese cobalt oxide battery, but it’s not a sure thing.

If you can’t get the same battery as your old one, you’ll want to know what you’ve got and what you need.

The lead acid battery is less common in the ebike battery world, but it’s not rare, so the possibility exists that you have one on your bike.

If you’re lucky, you’ve found the exact make and model of battery you want to replace. In this case, removing the old one and installing its replacement will be straightforward and relatively painless. You may need to use a tool or two, but it shouldn’t be too difficult.

When you find yourself unable to find the same battery, you must do your research before buying a battery. As we’ve seen, they aren’t interchangeable.

Check the old battery’s voltage, amp-hours, and physical size. Don’t forget to note the location of the battery terminals.

Once you’ve changed your battery, you don’t want to have to do it again, so it’s important to keep your ebike battery’s health in mind.

Your ebike came with a battery charger. If you’ve replaced your battery with a different kind, it will have a charger, and you should use that one. Using the wrong charger can create a risk of fire or explosion.

A battery’s charger has the correct specs (voltage, wattage, and the like) for that battery. Using the wrong one is asking for trouble.

Your bike’s battery doesn’t have a memory, so if you charge it before it’s empty, it won’t make the battery hold less charge in the future.

You should keep the battery dry and away from very high or low temperatures as best as you can.

That’s not to say it’s detrimental if you find yourself riding in the rain or on a brutally hot day. But in general, moisture is bad for all things electrical.

If your battery does get wet, dry it as soon as possible. Moisture can cause corrosion on the battery terminals.

If your battery gets frozen, charging it can damage it, so you’ll want to warm it to room temperature before plugging it in.

In general, cooler temperatures are better for your battery’s ability to hold a charge; you won’t be able to ride as far on a hot summer day as you can on a crisp fall morning.

Finally, storing your battery in a hot place like your garage in the summer can compromise how well the lithium inside conducts electricity. In plain English, a hot battery doesn’t work well.

Ebike batteries are neither universal nor interchangeable. The best-case scenario for your replacement battery is finding the same make and model, as you already know it works on your bike.

Failing that, check the voltage, amp-hours, battery size, and terminal connections to ensure you get a battery that will fit your bike, provide the correct amount of power, and keep your bike’s electronics in working order.

Your local ebike retailer should be able to help you, even if you didn’t buy your bike there. But since the wrong battery choice can damage your bike and make the situation expensive to fix, be sure you have the right one.