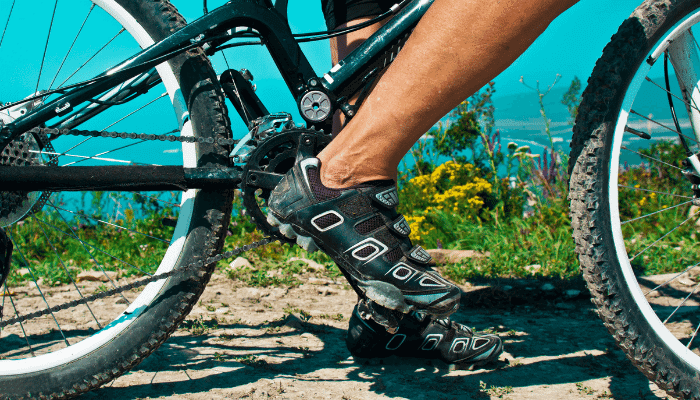 Generally, you have to charge your electric bike before going for a ride to utilize its benefits.

But are there any electric bikes that charge when you pedal them?

Do Electric Bikes Charge When You Pedal?

No, electric bikes don’t charge when you pedal.

However, there are electric bike models that charge a small amount when you brake or go downhill.

How Most Electric Bikes Work

Electric bikes are becoming more common as the demand for them increases. They are also becoming more energy efficient as technology evolves.

Conventional electric bikes need to be charged before you ride them. This involves plugging them in at home or somewhere with a power source.

When you are pedaling your bike, you create kinetic energy. This energy is what makes you move and is created by your body.

Electric bikes make that easier for you with a battery-powered motor.

New bikes, however, are becoming even more efficient. They add to the battery’s charge as you ride them, either with braking or with downhill riding.

Self-charging electric bikes have begun emerging in the last few years. They aim to be more energy-efficient than conventional electric bikes.

Self-charging electric bikes work by redirecting the kinetic energy you create when you pedal. The energy is redirected when you apply the brakes or ride downhill.

Normally, the kinetic energy created from pedaling is transferred to the brake pads as heat. Electric bikes instead redirect that energy to the bike battery.

This is similar to car batteries, which are recharged by the motion and braking of the car. However, the process is not nearly as effective with electric bikes.

So there are two main types of self-charging electric bikes. Ones that use regenerative braking, and ones that use downhill energy recapturing.

With electric bikes with regenerative braking, you can expect to get 1% to 15% energy back. This variation is dependent on where you ride.

For example, if you live in an area with little traffic, the effects will be limited. Consistently riding without engaging the brakes will not activate the recharging feature of these bikes.

On the other hand, if you ride somewhere with plenty of stop-and-go points, this changes. Stopping frequently will cause you to utilize regenerative braking more.

So this type of self-charging electric bike is great for people living in cities. Having to break at stop lights often will give you the most out of that recharging potential.

The RadCity 4 electric commuter bike uses regenerative braking to self-charge as you ride. Engaging the brakes converts the motor into a generator.

This means that each time you brake on the RadCity 4, the kinetic energy from your riding goes back into the bike’s motor. The bike essentially transfers your momentum into its battery.

Again, this is most effective in situations involving frequent braking. But even a 5% energy return can make a big difference over long rides.

Additionally, regenerative braking has already seen great improvements since its inception. It will likely become more efficient and less noticeable compared to normal braking as it evolves.

The main difference is this type of self-charging works best with frequent hills and slopes. An environment with many downhill routes especially will get the most charge.

The Eahora X6 Snow electric bike uses this type of self-charging. The bike’s E-PAS system stores some energy from going downhill into the battery.

The company claims the bike is able to save over 50% of its power, but reviews are not as generous. However, this again depends on the environment the bike is ridden in.

If frequently ridden downhill at speeds of at least 15 miles per hour, that claim is entirely possible. On most average terrains, you can expect a less substantial amount of charge.

That being said, even small amounts of energy recharged add up over a long trip. So you do not need a bike route with massive hills to make this type of electric bike beneficial.

Like regenerative braking, this technology is also improving. The Eahora E-PAS system is just one design that is evolving. Others will follow and improve upon it.

Why Don’t Electric Bikes Charge Soley When You Pedal?

As discussed above, there are two main types of self-charging electric bikes. Those that use braking and those that use downhill riding to capture energy.

So why don’t those bikes instead charge when you pedal? There are a couple of reasons for this.

When you pedal a bike, you are doing so to move it forward. The energy you apply as a downward force on the pedals keeps the wheels moving.

There is simply not enough energy left over solely from pedaling to charge the battery. The energy is being primarily spent to move the bike forward.

Electric bikes are meant to make long rides easier and uphill slopes less challenging. They still, however, require the rider to move the bike with force.

This leads to the other reason pedaling does not charge electric bikes. If the energy used to pedal the bike went to the battery, it would not ride the same.

The level of force you push the pedals with is relative to the speed your bike moves. The harder you push, the more energy the wheels have.

This energy is what allows the bike to increase speed or gain enough momentum to go uphill.

Redirecting that energy to the battery would defeat the purpose of pedaling. Pedaling would no longer give enough energy to power the bike.

What gives electric bikes their unique allurement is their ability to help riders. Not do the ride for them.

Electric bikes are essentially a hybrid between conventional bikes and motorbikes. They take some of the work required to move out of the equation, but not all.

This is why other methods of self-charging are more promising. They utilize points in the bike ride where energy is lost inefficiently.

The Future of Self-Charging Electric Bikes

As technologies improve, so will electric bikes. The current self-charging systems are likely just the beginning.

One of the main things that could be improved with electric bikes, in general, is the battery. An electric bike’s potential mileage is largely dependent on its charge.

As batteries are improved to hold longer charges, electric bikes will be able to travel even further. Not only that, they will become even more efficient.

As discussed above, currently, the self-charging systems that exist have significant limitations. They are only able to obtain a fraction of the energy that is given off by the rider.

Their efficiency is also largely dependent on the environment(s) they are ridden in.

The electric bikes that use regenerative braking require frequent stops to gain a meaningful charge. This shrinks their recharging power when ridden on long trails with few stops.

The electric bikes that use downhill energy recapturing require frequent slopes to gain a meaningful charge. This makes riding them in flat environments not majorly beneficial.

But perhaps in the future, electric bikes will combine both of these technologies. This would allow self-charging to be more applicable to different environments.

And perhaps pedaling too will become a primary means of charging an electric bike. It is certainly possible that the technology could evolve to be more efficient.

Additionally, there could be other means of self-charging technologies that become common for electric bikes. Solar energy comes to mind.

Do Electric Bikes Charge When You Pedal? Where the Answer Stands Today

Currently, there are no major electric bikes that actually charge when you pedal. Even if one claims to do so, the technology is largely ineffective.

Pedaling an electric bike requires using almost all of the energy produced to actually move the bike. There is not enough energy left over to give the battery a meaningful amount of charge.

Instead, other technologies have emerged to charge the battery while you brake or ride downhill. Each of these technologies is new and imperfect.

Regenerative braking uses the energy normally lost to the brake pads to give the battery charge. This technology is great for cities and environments with frequent stops.

Downhill energy recapturing uses energy gained from going downhill to give the battery charge. Environments with slopes that cause the bike to go 15 miles per hour work best.

Technology may, however, improve to allow for electric bikes to charge when you pedal. Batteries are improving quickly and becoming more efficient, so it is possible.

A combination of the current self-charging methods may work best on future electric bikes. Allowing you to gain a charge as you ride in different environments.

For now, it is best to fully charge your electric bike at home. Especially if you are going for a long ride.