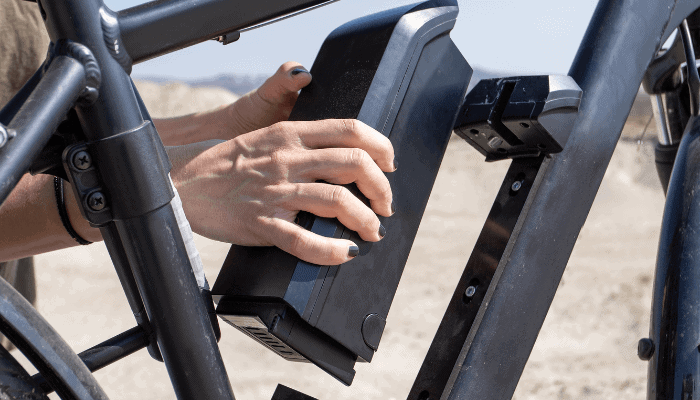 However, one of the challenges of owning an electric bike is maintaining the battery. Over time, batteries can lose their capacity, making it harder to ride for long distances.

It can be pretty challenging if you have no experience repairing e-bike batteries. However, here is a guide you can follow to repair your electric bike batteries.

Symptoms of a Faulty Battery

Your electric bike battery may need to be repaired if you notice any of the following symptoms:

If you’ve noticed that your electric bike battery is taking longer to charge, it could be a symptom of a faulty battery.

While there are several potential causes for a battery to degrade over time, one of the most common is simply aging.

Even with proper care, batteries will eventually end their useful lifespan and must be replaced.

Often when you connect the charging cord to an electric bike battery, you’ll hear or feel a slight jolt as the charging process begins.

If you don’t feel this jolt, or if the charging process seems to be taking an unusually long time, it could be a sign that the battery can no longer hold a charge.

This problem is often caused by damaged cells within the battery, which can occur due to overcharging, physical damage, or age.

If you’ve noticed that your electric bike battery doesn’t seem to be holding a charge as long as it used to, it’s probably time for a repair.

If you’re pedaling your electric bike and the motor isn’t providing the boost it used to, it could be a sign that the battery can no longer provide enough power.

This could be due to several factors, including damage to the battery cells or age-related degradation.

If you press the power button on your electric bike and nothing happens, it’s a good sign that the battery is dead and needs to be replaced.

Battery Is Swollen or Leaking

If you notice that your battery is swollen or leaking, it’s time for a replacement. A swollen battery is a sign of internal damage, while a leaking battery may lose its ability to hold a charge.

How to Repair Electric Bike Batteries

An electric bike battery is always composed of several cells connected in series or parallel. When one of those cells fails, it can cause the entire battery to fail.

Using a wrench of the right size, unfasten the battery pack cover on the electric bike. The positioning will vary from bike to bike but is usually on the underside, near the rear wheel.

Once the cover is out of the way, take out the battery pack by unplugging the socket connecting the battery to the electric bike.

It would be best if you were careful not to damage the plastic cover, socket, or cables, since these will be used once the repairs are done.

Open Up the Battery Pack

Once you have removed the battery pack from the bike, the next step is identifying your type of battery pack.

The two most common types of battery packs are lithium-ion and lead-acid. Once you have identified the type of battery pack you’re dealing with, you can proceed to the next step.

The next step is to find the access panel. The access panel is usually on the side or bottom of the battery pack and will be secured with screws or latches.

To open up the battery pack, you will need to disconnect each group of batteries from its respective terminals.

Once all the batteries are disconnected, you can remove them from the battery pack.

Now that your electric bike battery pack is disassembled into its cells, it’s time to test each cell to see if it’s still good.

This is a crucial step in troubleshooting an electric bike battery problem because it can help you pinpoint which cell is bad and needs to be replaced.

To test a cell, you will need a digital multimeter.

Repeat this process for each cell in the battery pack until you have tested them all.

This code is very crucial when sourcing new cells. Get the same voltage and capacity cells from a reputable source.

Failure to follow this might lead to the damaging of the new cells or the already existing ones.

Even worse, overheating might occur, which could potentially cause a fire.

If you’re unfamiliar with soldering, there are plenty of tutorial videos online that can show you how to do it, or you could consult a technician.

When soldering, be careful not to damage the cells with the soldering gun as this can cause an explosion which might cause serious injury.

Once you have replaced the damaged cells, it’s time to reassemble the battery pack. Start by connecting the batteries in parallel first and then solder them in place as they were before.

After that, connect the batteries in series and solder them in place. Once you have done that, reattach the control panel and screw or latch it in place.

Now is an excellent time to test the battery pack to see if it’s working correctly. But, first, attach the socket without putting everything back in place.

This is to avoid having to go through the process of disassembly again in case of a problem.

Test if the bike powers on by connecting the power wires to the battery.

Next, test if it charges by connecting the charger. If everything works correctly, you can reattach everything and observe the battery pack’s performance.

Bring the battery to a full charge, paying close attention to the temperature or any smell that might emanate from it.

If all goes well, congratulations, you have successfully repaired your electric bike battery pack!

Here are some safety tips to keep in mind when repairing your electric bike battery:

1. Always disconnect the battery from the bike before starting any repairs. This will help prevent any accidental electrocution.

2. If you’re not comfortable performing the repair yourself, take it to a professional. They have the experience and knowledge to fix your battery correctly.

3. Be sure to use the proper tools for the repair. Using the wrong tools can damage the battery and potentially cause injury.

4. Follow the instructions carefully. Don’t skip any steps or rush through the process. Taking your time will help ensure a successful repair.

Tips for a Longer Battery Life

Maintaining your electric bike a certain way might increase your battery’s lifespan.

Here are some tips to help you prolong the life of your battery:

Third, try using your electric bike moderately – putting too much strain on the battery will cause it to degrade more quickly.

By following these tips, you can help ensure that your electric bike battery will give you years of trouble-free service.

Electric bike batteries are a crucial part of the bike and must be well-maintained for the bike to work properly.

If you find that your battery is not working as it should, don’t hesitate to repair it yourself. With time and effort, you can get your battery working like new again.

Just be sure to follow the instructions carefully and use the proper tools to avoid damaging the battery or injuring yourself.